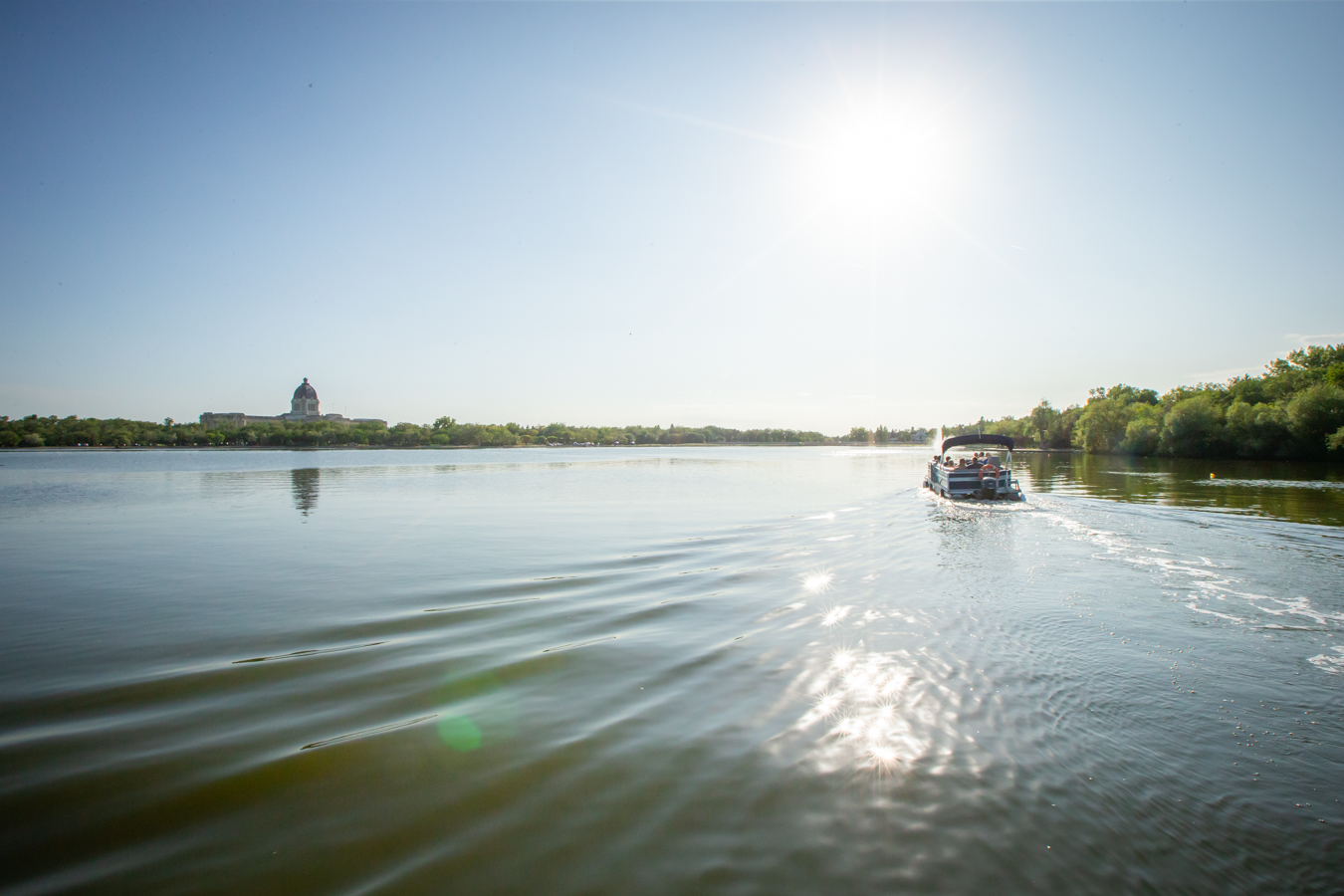 Wascana Lake was originally created in 1883 by damming Wascana Creek between Angus and Rae Streets, 1½ blocks west of the present Albert Street dam and bridge, to provide a "stock watering hole.” The Lake was soon turned to recreational use and Reginans took to the lake for sailing and canoeing. Its size was slightly reduced in 1908 when a new dam and bridge were constructed in their present location.

The lake continued for a time to be used as a domestic water supply and for stock watering; it also supplied the new legislative building. A longer term effect resulted, however, when lake water was used to cool machinery in the power plant (now the Saskatchewan Science Centre) that was built in the eastern sector. Heated water returned to the lake, causing that sector to remain ice-free through the winter, and several species of migratory birds made it their year-round habitat. In 1956 the eastern sector of the lake was declared a Federal Migratory Bird Sanctuary.

Wascana Lake was drained and deepened in the 1930s as part of a government relief project. 2,107 men widened and dredged the lake bed and created two islands using only hand tools and horse-drawn wagons. During the late 20th century, sediment accumulating at the bottom of the lake eventually reduced its depth by 35 per cent, which had reached 1.5 metres by 2003. In addition, there was an abundance of weeds throughout the lake. 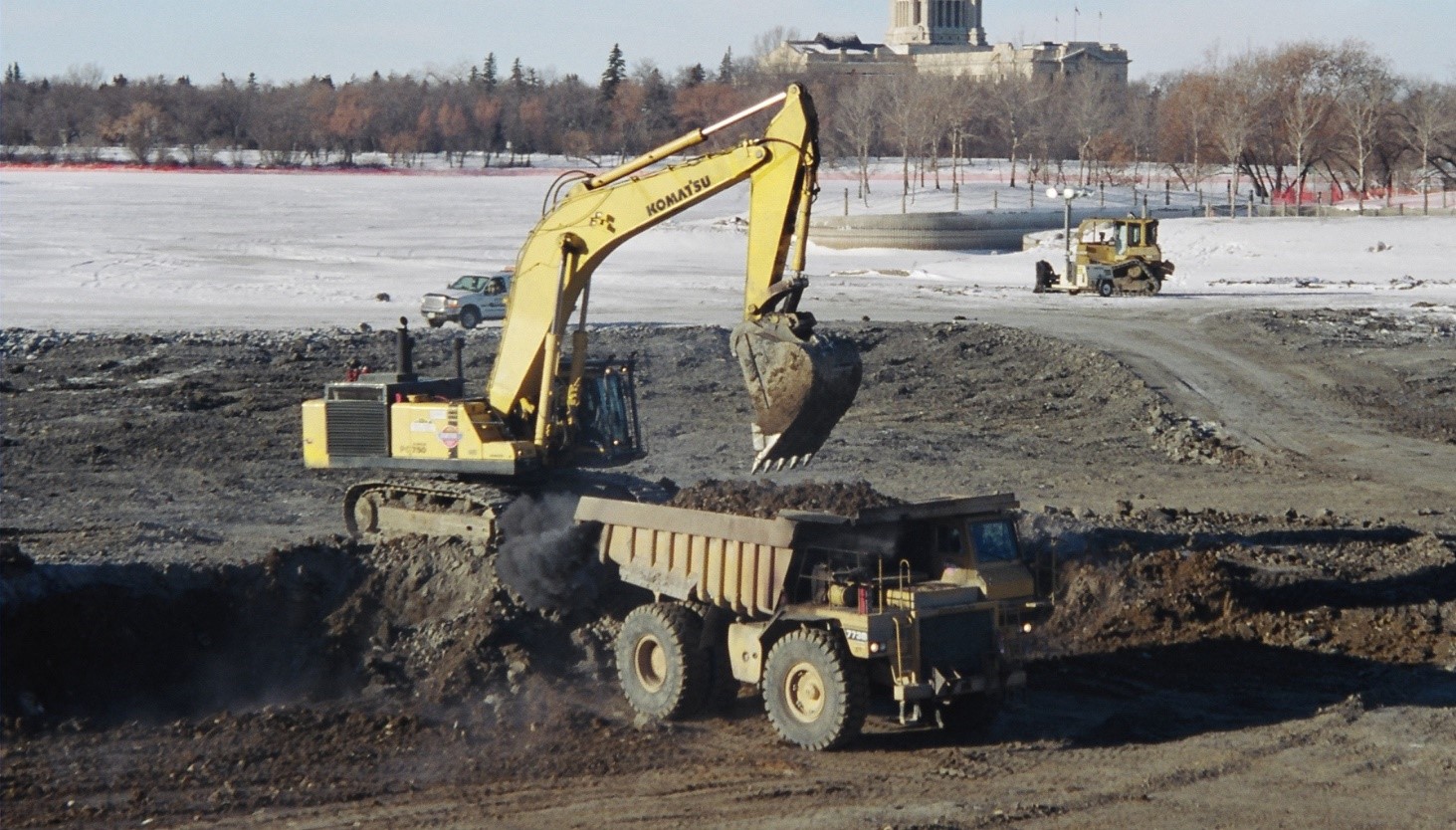 The Wascana Lake Urban Revitalization Project, known locally as the Big Dig, was an $18 million project to deepen Wascana Lake.

During the fall and winter of 2003-2004, Wascana Lake was again drained and dredged to deepen it by an average of about 5 metres (16 ft). The Big Dig, was primarily to decrease aquatic weed growth, improve water quality, and allow more competitive and recreational rowing, canoeing and paddling during the summer months.

Excavation of the lake was designed by Clifton Associates and performed by Dominion Construction of Regina and Broda Construction of Kamsack. The lake was dredged to an overall depth of 5.5 metres with a deeper section of 7.5 metres serving as a fish habitat. Over 1.3 million cubic metres of soil was removed from the lake bottom between 6 January and 21 March with crews working 24 hours a day.

The Big Dig also included the addition of a new island and general re-landscaping around the lake. Pine Island includes a bridge for pedestrian access, as well as a pedestrian path and a waterfall and provides a great location for spectator viewing of canoe/kayak and rowing races hosted on Wascana Lake. In 2014, Wascana Racing Canoe Club, the Regina Rowing Club and Wascana Centre Authority, with significant financial support from the Regina Hotel Association, completed the construction of a Finishing Line Facility on Pine Island. This makes Wascana Lake a world-class venue for competitive canoe/kayak and rowing competitions.

In addition to the deepening of the lake, construction crews created additional features such as Pelican Island and an enhanced Wascana Hill.

Crews installed thirteen aeration diffusers throughout the lake to produce oxygen to the water in order to improve its life-supporting quality. A circular fountain was erected in the center of the lake opposite the legislative building.

Given the benefit of a 10-year perspective, the “Big Dig” has been a success. Scientists at the University of Regina, who have been studying Wascana Lake along with other lakes throughout the province, observe that the lifespan of the lake has been extended to beyond 500 years. They also observe that plant growth and the consequent noxious odours have been significantly reduced.

These benefits are in addition to the significant benefits a deeper lake has brought in terms of recreational use of the lake and the lake’s capacity to provide water for irrigation purposes.

A trail system encircles the West Lake, with a new pedestrian bridge & promenade at Albert Street and another at Broad Street. A lakeside promenade and overlook are located on the northern shore. Small docks are located below the Willow Island overlook. The Trafalgar Overlook, on the east shore, is on the opposite axis to the Legislative dome and has a protected pool beneath it. The racing canoe club boathouse, rowing club boathouse, marina and marina restaurant are located nearby. Another overlook is at the south shore. The newly created Pine Island with its water aeration cascade and Finishing Line Facility is on the old Broad Street Bridge abutment.

There are a number of highlights along the blue trail including Speakers Corner, the historic Bandstand, the Marina and of course the majestic Legislative Building.

The Waterfowl Display Pond east of the Broad Street Bridge highlights the various attractions along the East Lake. The scenic walk takes you past the Conexus Arts Centre and through the north boundary of the University of Regina campus. After crossing the lake again near the ring road, the path takes you through the Wascana Centre Natural Habitat Area. This area houses an impressive marsh ecosystem that many species of mammals, birds, fish, amphibians, reptiles, insects and plants call home. It is an extraordinary place to explore nature without leaving the city. The path also winds its way through the southern tip of Candy Cane Park, the Saskatchewan Science Centre and Family Park area before arriving back at the Broad Street Bridge.