A little about Canada Geese

Canada Geese arrive back to Wascana Centre usually around the middle of March. Pairs will quickly begin the process of making their nests and laying eggs after they arrive! 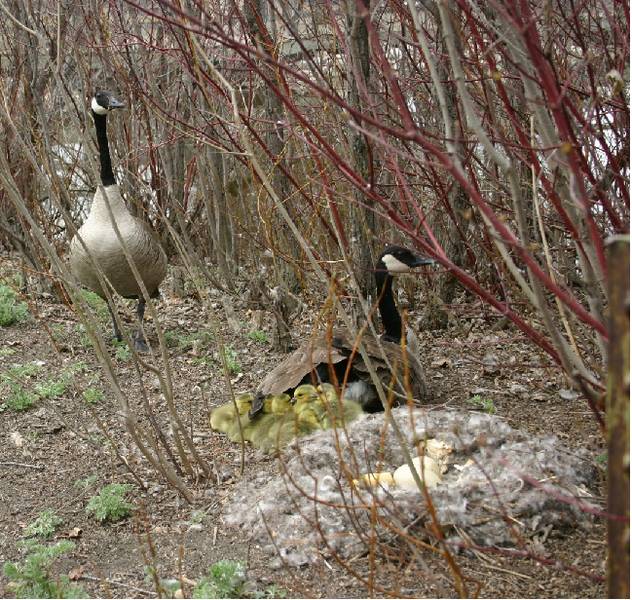 Depending on the weather Canada Geese can begin laying eggs as early as the 27th of March! On average Canada Geese lay between 5-7 eggs but clutch size can range from 1-13 eggs. One of the most fascinating parts of Canada Geese behaviour is that the female will not begin incubation until she has laid all of her eggs. This ensures that all the chicks will develop at the same rate in the egg and hatch within hours of each other.

The female will incubate these eggs for roughly 28-30 days at which time the young geese will hatch. The young birds will remain hidden under the female until all the young are dry (which can take up to 24 hours). At this time both the female and the male will escort the young birds to the water. The whole family will never return to the nest, although the adults may reuse the nest in subsequent years.

Unlike many other bird species, young Canada Geese are hatched able to forage on their own, so they do not rely on their parents to feed them. They do depend on them for protection from cold and rainy weather and predators.

The young grow quickly and at the age of 8-10 weeks are able to fly. Typically Canada Geese do not begin breeding until their 3rd or 4th year of life. So for the next few years they will wander in juvenile flocks. Young Canada’s will remain with their parents and siblings as they migrate south for their first winter and remain together for the entire winter. They may even return back to the parent’s breeding grounds in the spring. Once the parents begin breeding again, the yearlings presence will no longer be tolerated and they will be forced to move on.

During the fall, migrating Canada Geese from across Saskatchewan and even more northern areas will stop at Wascana Centre. As many as 10,000 birds will use Wascana as a resting stop. During the morning and evening, the birds will fly out to surrounding agricultural land and feed on leftover grain. During the middle of the day as well as the night, they will stay around Wascana Lake for protection.

Once the ice freezers over, usually in November, most of the geese will depart for warmer climates. If a small area of water is kept open (from aerators in the lake), a few dozen birds may overwinter here.

Once they decide to move, the majority of geese that breed in Wascana Centre spend their short winter (December to March) in South Dakota and Nebraska. Once it starts to warm up in March, they begin the cycle all over again! 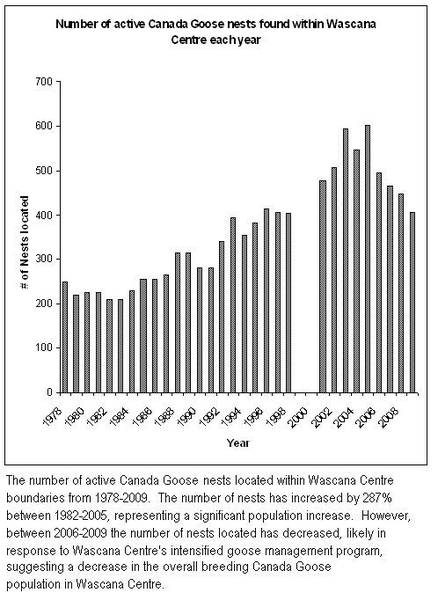 As a result of being a relatively predator-free and food abundant habitat, Canada Geese have adapted very well to living in Wascana Centre as they have in many other urban centres across North America. Because of these factors the goose population here has increased greatly over the last three decades. In order to maintain a balance between allowing the geese to thrive and protecting the other components of Wascana Centre (e.g. turf, flower beds, walking paths, etc.), Wascana Centre Authority are actively managing the Canada Goose population within the Centre.

Wascana Centre’s goal is to find a balance between sharing the park with the geese while providing a great experience for everyone.

Wascana Centre, under the guidance of Canadian Wildlife Service and the Saskatchewan Ministry of Environment, manages the Wascana flock using a number of different management techniques.

A snow fence is set up around the Queen Elizabeth II Gardens in front of the Legislative Building once the flower beds have been planted. This fence is used to reduce damage to the beds from foraging geese. 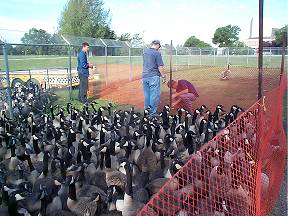 This non-lethal technique is used to reduce the number of Canada Geese in the park during the park’s busy summer months. Between 800-1000 young and adult Canada Geese are moved from Wascana Centre and released in northern Saskatchewan (e.g. Cumberland Lake) near the end of June. Many adults will return to Wascana Centre the following year. The young may return with the adults the following year, but will typically nest near the northern release locations (i.e. where they learned to fly) when they attain breeding age. This technique has been in practice at Wascana Centre for over 40 years!

Due to the very high number of nesting pairs of Canada Geese in Wascana Centre, nests are located during incubation and the majority of eggs in a nest are rendered non-viable by applying an environmentally safe mineral oil to them. This humane technique, applied early in the development of the egg, reduces the number of young that are produced each year. Currently, without egg control, up to approximately 2,300 goslings could hatch in Wascana Centre each year.

To preserve flower beds and turf around the Centre and to reduce the amount of fecal matter on paths, feeding of Canada Geese or other waterfowl is NOT encouraged around the west lake. Wascana Centre encourages feeding around the east lake, particularly in and around the Waterfowl Park Display Ponds (east of the Conexus Art Centre). This feeding restriction will help draw the birds to the east lake and away from the flower beds and turf around the west lake. Watch for posted signs around the Centre to help you find where you should and should not feed the geese. To the right is a map that outlines the no-feeding zone. 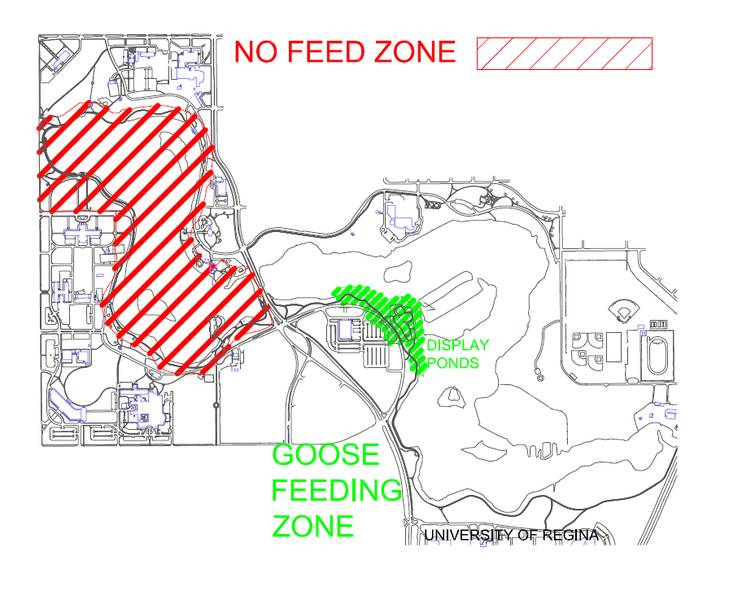 From 1987 to 1993 Canada Geese that were translocated from Wascana Centre were banded by Saskatchewan Environment. However, since 1993 no banding has occurred despite the continued goose management program here at Wascana.

In 2009 park naturalists instigated a large scale banding program in Wascana Centre to monitor the current management program. By individually marking the geese, park naturalists can determine how many geese are returning to Wascana each year. More specifically they can determine how many young birds are raised in the Centre and how many breeding adults return each year. In addition to this information, more can be learned about the age structure of the Wascana flock, where they overwinter, how many are annually harvested by hunters, and much more.

Starting in 2010 some Canada Geese within Wascana Centre will carry a different kind of band besides their standard aluminum band. Known breeding pairs will be marked using red coloured bands. These bands are readable with binoculars or even the naked eye. By banding these known breeding adults, park Naturalists will be able to learn more about pair bonding between Canada Geese in Wascana.

Some of the questions that will be answered by this study include:

The code on these colour bands are M001 to M250. See if you can observe a colour-banded goose in the park! Report your band observations, including date, specific location, band combination observed, if other banded birds were present (including their codes, the number of goslings present, and any other pertinent information) to naturalist@wascana.ca. 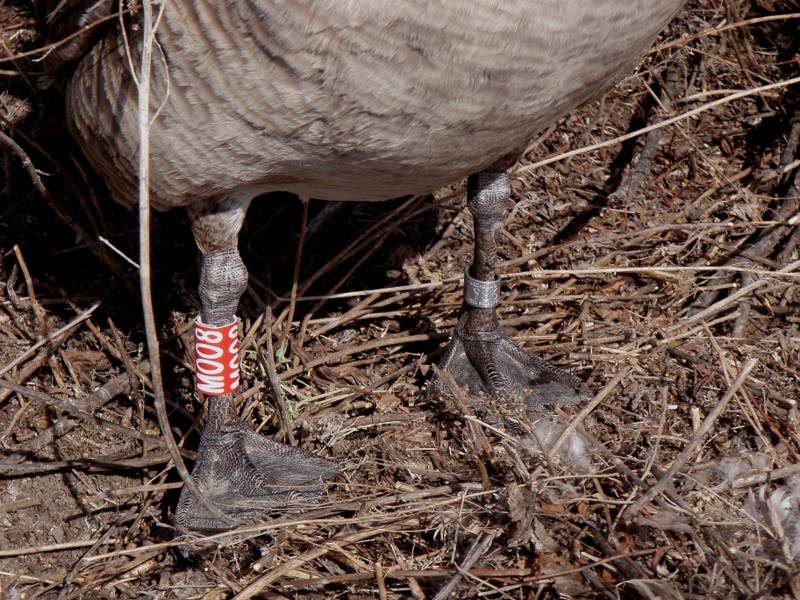