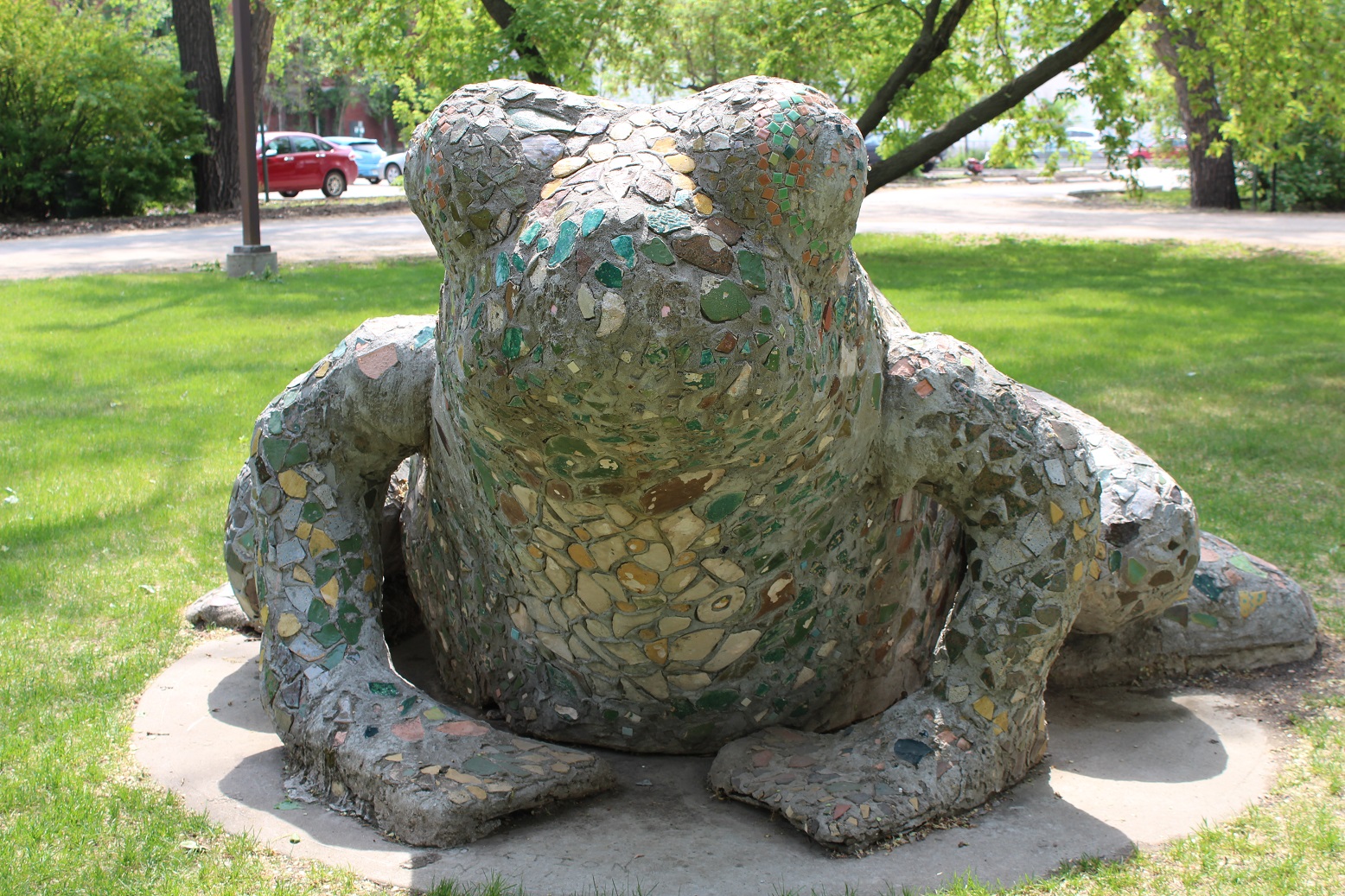 The seemingly straightforward task of hiring someone to repair the well-known frog sculpture on the College Avenue Campus became a lesson in local history involving students’ admiration for a professor, skullduggery, and three renowned artists.

David Gillhooly, an art instructor originally from California was admired by both students and fellow art instructors during the 1960’s. Subsequently, he enjoyed considerable success as an artist, recognized primarily for his ceramic sculpture of food, plants and frogs. For reasons unknown, his contract was not renewed by the Faculty of Fine Arts and he left Regina in 1971. It is generally acknowledged, however, that Gillhooly was a major influence on visual art and artists within Saskatchewan.

Joe Fafard, a colleague of Gillhooly’s, was assigned to instruct an Art 100 class in the 1971 winter term. Despite the decision of administrators, Joe and his students were fond of Gillhooly and decided to honour him by building a frog to commemorate Gilhooly’s time in Regina. From January to April, 1971, Joe’s Art 100 Class – consisting of 10 young women – constructed the frog out of concrete inlayed with ceramics in the sculpture studio (formerly a gymnasium) on the College Avenue Campus. In April, they contacted Club Towing and five parts of the frog were brought down a ramp and carefully set onto the lawn in front of the College Building.

Alas, a peaceful life was not to be the fate of the young frog. In 1972, a group of engineering students from the University of Saskatchewan attempted to remove the frog. What was to have been a mischievous prank went awry, even with the ingenuity of engineering students, the legs broke away from the frog. The legs had been loaded onto a truck by the students when police intervened and the frog – with legs now unattached – remained on the College Avenue lawn.

A few attempts, mostly unsuccessful, were made over the years to repair the frog. Pleas for repair were sent to the University and to Wascana Park. A typical letter, sent in 1997, explained that “This frog, from our observations, must be one of the most popular attractions of the Park. Countless families pose for pictures and children play games around this giant amphibian.”

Finally in 2004 with the approval of Joe Fafard, Lorne Geug was officially engaged to restore the frog. Lorne, a well-known Regina artist, undertook structural and artistic repair and completed the work in the spring of 2005. The College Avenue frog continues to gaze serenely at the traffic on College Avenue acting as a landmark, a prop for photographs and a place for children to play.